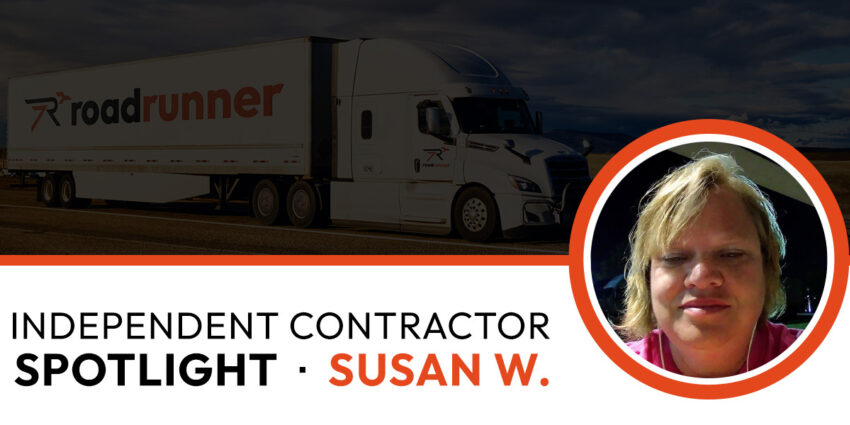 On the road with driver Susan Wilcox

Like many truck drivers, Susan Wilcox became a driver later in life as an empty nester and after a long first career. She spent years working a factory job in the shipping department and watched drivers come and go as they made pickups. She always loved to travel and her father, who was a truck driver in the 1950s, often said how much he missed being on the road. Once her son was grown and out of the house, Susan knew it was finally the right time to make a career switch.

“I started talking to drivers coming in and asked them a lot of questions,” she says. “They talked about the kind of money they made and all the different places truck driving took them and I just knew this is what I wanted to do.”

When Susan became a driver nearly six years ago, she already had her sights set on becoming a Roadrunner driver. However, she had a few setbacks early on in her driving career that prevented her from working with us right away. Susan was finally able to join our team as an independent contractor last July.

“I worked hard so I could move over here to Roadrunner,” Susan explains. “I’d heard Roadrunner was the place to be and they’ve lived up to that expectation and more.”

“The Roadrunner team absolutely listens to anything you have to say and they go to meetings, talk to their people and they listen to our ideas and try to implement them,” she says.

Susan mentions that one concern she had was regarding one of the terminals and the tight spacing drivers had to maneuver and park.

“I only mentioned it once and immediately someone was on the phone looking into how they could improve the situation,” she adds. “I also love that Roadrunner keeps me moving. The whole Midwest team is just awesome at keeping their drivers running,” she says.

Susan, who lives near Flint, Michigan runs throughout the Midwest. She tries to stay out on the road for as long as she can and often takes her resets and home time wherever she happens to be at the time. When she does happen to get home, she usually spends that time with her sister or camping with family. She and her partner also have a vacation planned to visit Niagara Falls together.

“When Roadrunner says they value you as a driver, they really mean it,” Susan says. “This is truly the best company to work for.”

If you’re interested in joining the Roadrunner team, give us a call today!